I have to confess that I use an iPhone for more than one year. Yes, that ugly, limited propietary thing. Why?

Well, it is along and funny story. As I have noticed in my previous post, I have a problem with wear-off of some of my devices. Unfortunately, the all my phones have had the same problem (both OpenMoko FreeRunner and the GTA04 phone are machanically damaged with some detached buttons and connectors). I also used a Nokia smartphone but it has the same problem (it wasn’t new when I got it).

In January 2014 I got a old iPhone 3G from one of my colleagues. She got a new and larger smartphone (something Android-based, I thing) and she pass her old phone to me. The iPhone has had a new battery and I also have hot a pouch and two power adapters with it. I initially have wanted only to play with thi thing (I had several Apple gadgets in the past and I still have an G iMac and a G4 Mini but I never ever used an Apple phone before).

Unfortunately, the rest of my phones died shortly after that and the iPhone became my main (and the only working) phone shortly after its purchase. I wasn’t initially very happpy from that because it’s limits are obvious: no access to file system (so no USB mass storage, no easy data transfer, no…), terrible iTunse/App Store support for legacy devices and much more. 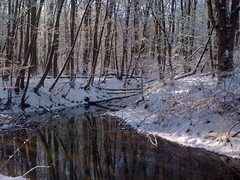 Anyway, there are some good things: it is actually usable as a phone. It can be easily used for phone calls and for sending of SMSs. The battery life is also nice (at least for the touscreen-based device). It can last after about 4-5 days of my normal use (no WiFi, no data connection, just calls and SMS with some music).

It’s also good as a music player (except the terrible part of obtaining music via the iTunes, of course – but this has to be done only once). To be honest it is the only Apple device that I am able to use on a daily basis (both my Apple desktops are used very infrequently). There is also a camera. It has fixed focus and the camera itself is rather a basic one. The picture in this post was taken by this camera, by the way.

That’s all. I can’t install must stuff here (Logout has a nice article in Czech about the possibilities but my device has much older iOS so my situation if obviously much worse). Actually, I am satisfied. It does amost only one thing for me (it serves as an phone) and it does it well.

I received today an update for my Openmoko phone: a brand new GTA04 update set from the Golden Delicious Computers

I put the things to the original Neo Freerunner case so the phone still looks the same.

At the moment I have a working phone (I can call and receive calls) with the QtMoko Linux installed. I’m going to test the WiFI, GPS and more.

I was recently in Prague (it’s about 3.5 hours in train for one way) so a have taken a picture of my mobile travelling setup.

Actually I had a 12″ laptop in my backpack but I didn’t used it during the travel. Next time I will leave it at home.

I new have a working WiFi card for my NanoNote so I was able to read/write e-mails and download RSS/Atom feeds to the NanoNote. I also used my usuall offline tools (vim, octave, hnb,…) and also the Gmu music player.

The Neo Freerunner phone has been used for few SMSs and as a GPS after I leaved the train.

Recently I have used my Ben NanoNote during several shorter trips.

The first one was a trip to Prague to attend the Openmobility conference. I used the NanoNote as a music player, as a notetaking device and also as a source of sound for the Milkymist One during a short demo at the Openmobility.

I’m routinely using the Ben for taking of notes so I have used it also during my trips to several conferences and meetings (Brno, Kosice). It’s very practical because the Ben is small and compact so it can be always available. The only problem is that I’m not able to connect it to WiFi networks (my WiFi card died before some time) so I have to carry a phone for e-mails and for www browsing.

There will be a conference about open source in mobile (and portable) hardware a and software. The date is April 21 and the place is Prague, Czech Republic.

There is a very interesting effort: the GTA04 mainboard for the Neo Freerunner smartphone. As you may know the Freerunner is quite oudated by today standards and also it has several design bugs which made it even more slow and annoying (unsuccesfull integration of the graphics accelerator or the well known problems with a deep leep mode or with the sound).

The advantages are obvious: the hardware is much more up to date (an 800 MHz CPU, a 512 MB of a RAM and a 512 MB of an internal flash space, a digital compass and a barometer and of course a GPS and the 3G modem). The whole thing should run smoothly and it is expected to have less hardware bugs.

There are also disadvantages. The biggest one is the price. One can buy a mainboard for 666.66 EUR or a complete phone for 749 EUR. Obviously it is not cheap. The main problem is that the Golden Delicious can not obtain hardware components in large qountities which means that they have to pay much more than large phone makers.

Anyway it is possible to get it for a much lover price – for 474 EUR or 499 EUR. There is something called a “GTA04 Group Tour”: you may order it for the price right now. If there will be enough buyers (350-400) then the GTA04 board will be produced. If not then the money will be refunded. You may find more details here. It is an interesting possibility so I ordered one.

I finally have got an another Neo Freerunner. It’s a basic one, without upgrades and bugfixes. I have no plan to use it as a mobile phone.
I have got it because I think that is is a better GPS device than other ones. It fits in my hand and it is quite durable.

Recently I have tried to install a QtMoko Linux on it. Just to try it because
the SHR Linux with the TangoGPS sofware has been just enough for me. But current SHR version has several problems (for example, the alarm clock does now work, the time in GUI doesn’t update after resume from suspend – it needs some time to update – and so on). So I decided to try the QtMoko.

I’m still (positively) surprised: it is not very elegant and some thing are overcomplicated but it works. It just works and everything can be done withing the GUI (I generally prefer a comand line approach – but it is not wery sane to control a touchscreen-only device from a text terminal…). The only problem that I still don’t have a wirkting X server (so I can’t use the FBReader or the TangoGPS at the moment). But it is probably my fault.

Now I’m trying to learn the native NeronGPS application. It’s similar to the TangoGPS but it’s designed for the QtMoko. It’s younger so some features are still missing but the basic things works as expected.

P.S. Sorry for no informations about the Ben Nanonote. It have become a very boring device – I recently have had no issues to solve. It just works…

I was mostly satisfied with my FreeRunner but I have found that smartphones in general probably are not what I need. It had some advantages over other smartphones (for example it’s openness have allowed to easily port interesting Linux software and it has been well customizable) but it also have had some disadvantages. The disadvantages have been mostly related to FreeRunner’s aged hardware design: not so easy to use touchscreen, GUI performance, strange 2.5″ audio connector and so on.

One of its main disadvantages has been the battery life. But it is not special problem of the FreeRunner. It’s battery life has been less or more comparable with other smartphones. And it recently have become a problem for me. I used FreeRunner’s capabilities (GPS, WiFi, special and custom applications,…) only few times during year. But it was necessary to recharge it every two or three days. I usually carried who pocket machines with me: the FreeRunner and the Ben NanoNote. I have found that the Ben is more practical for my needs: mainly because it has real hardware keyboard and it can easily run not also command-line applications. In my opinion use of mature command-line or text-oriented application (like Remind, Mutt or HNB) is more practical than use of new or half-baked graphical tool which is usually slower or functionally limited (due limits of touchscreen input possibilities).

So I decided to replace my smartphone with a dumb phone (with this one). It is not that exciting nor interesting, it may be not so user friendly like the FreeRunner was but is surely has incomparably longer battery life and it is little more durable (it is also much lighter). It si good for SMSs and for phone call and it is that I’m expecting from phone. Computing tasks (including notetaking and time management) should be done by a computer.

I have finally updated software on my Neo FreeRunner cell phone.

I have using the SHR Linux distribution for more than one year and I am less or more satisfied with it. But I didn’t wanted to update the phone before return from traveling so I have updated only recently. So I never used the new Illume2 environment before.

The older environment (pictured above) have looked better to me (and it also was bit more practical). But OK, I can live with the new one (see below). And it is also less buggy and it is actively developed.

The bad thing is that of by older Gtk+ applications now can’t work – I have to recompile them. It looks like easy task but setting up of the building environment (compilers, libraries,..) in not so easy. So I can’t use them right now.

The good thing is that there is finally an useful calculator – the Gaculator from the GNOME desktop.
It includes all the functionality that I need (I don’t need too much: trigonometric functions and ability to use degrees is enough for me…). And trere is also the Gnuplot plotting program. Actually, I use my Ben NanoNote much more frequently for these things but it is sometimes useful to have such software on the phone, too.

I also updated the bootloader from old U-Boot to newer Qi and the GPS chip now can works even after suspend and resume (it still need a lot of time to get a fix, though). That’s nice.

I still miss a good e-mail client and a RSS reader but it is not a big issue because a use the Mutt and the SnowNews on my Nanonote.

Still I must say that the phone environment is more eye-candy but the simple textual environment on the NanoNote is much, much more productive.