I’m still trying to find an optimal software and hardware for me. Of course, it is a never-ending process because the needs are constantly changing.

I was a (relatively) long-time user of the remind calendar program. It’s a CLI program with huge possibilities and it was more than optimal for me for a long time: it is small, and extremely flexible. It has only one disadvantage: it is meant for personal use – it means than it is not so easy to synchronise it between several different devices and it is very hard to convice non-UNIX users to use it, even for read-only use (rsync and diff are not options for everyone…).

Thus I was forced to use the WebDAV protocol and the tools that are available on different platforms that I use online:

Honestly, all these tools are far inferior to the remind. The only advantage is that the calenar can be shared with other people.

For programming I still use the Vim (or vi if necessary) plus a command-line C compiler (the GCC in the most cases). I started to use the BASIC to be able to program my older machines (Elektronika calculators or Atari Portfolio) but I still tend to program the stuff in the C first and then to rewrite it to the BASIC. It’s a strange approach but so far it forks for me. To test BASIC codes on a desktop I use the ByWater BASIC interpreter. Older versions of this interpreter can be easily compiled on the IRIX.

And I still use the GNU Octave for math stuff and for work-related utilities. It’s easily available and it works well (at least for me).

That’s all for today…

It may be unexpected but it is really welcomed: there are still emerging new or updated programs for the SGI IRIX (development of the IRIX was cancelled in 2006). 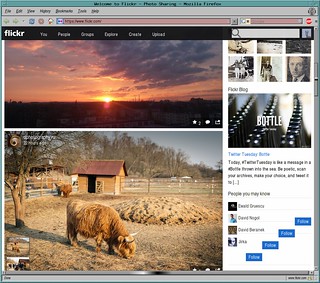 The first thing to mention is an optimized build by diegel from forums.nekochan.net. It does not look like a big progress but it runs noticeably faster on certain SGI boxes (including my O2). 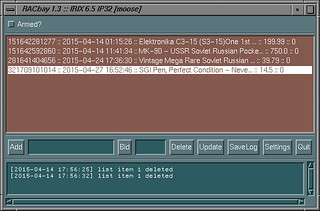 The second thing is even more interesting: it’s a bidding tool for the eBay. It’s writen in Motif and it is IRIX-only. That’s pretty interesting.

Unfortunately, recently I have experienced several failures of not-so-old hardware: 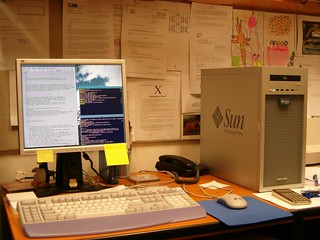 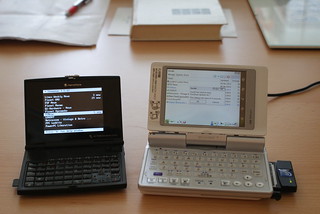 Also the Elektronika MK-90 refuses to start (there are some strange sounds, probably some recapping will be needed). But it is much older than the other machines (it’s from 1990). 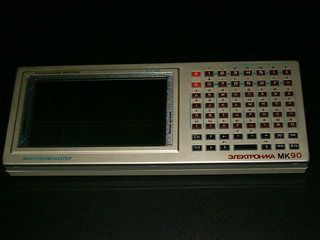 I have tried to resuscitate my old tablet: the Ainol Novo 7 Paladin. I stopped to use it near before two years because I thought that it is damaged.

First I tried to run it without microSD card (and it worked), then I added spare card to it and then I have started to optimise the installed software. After removing of about 90% of applications the tablet have started to be snappy and responsive. Some problems have remained – a random effects (ghost presses) on the touscreen are the most annoying.

Some of software cannot be installed at all – it’s a MIPS device and it is not able to run any native ARM code. Thus the C:Geo and many others are out of the interest here. The device also does not have GPS, nor Bluetooth  so navigations and the Pebble cannot be used here. Also, there is no camera so no photos can be taken and no barcode or QR-code stuff can be red.

It can run the FBReader, the WordPress, the Evernote and also a Gopher client (the Overbite). So the most important stuff is available. Also on-line LaTeX and Octave clients are available (Anoc/VerbTeX).

It can be a nice device for places with higher risk of loss or damage. I have an increasing feeling that most of my pocket devices are too precious to be carried to such places (Zauri, Palms, Psions) so an availability of a cheap, small and light tablet is a good thing.

Near any portable device today has an integrated digital camera (even my phone has one). Their quality differ and it is obvious that big number of megapixels has no direct relation to quality of photos.

I still hightly prefer a dedicated device (with optical zoom) for taking pictures. In my humble opinion even a small digital camera is better than most of camqeras build in phones and tablets.

So I still use a HP PhotoSmart 735 thing. It is enough for a quality level of pictures that I am able to make. Also it is relatively easy to use and it uses easily available consumables: 2xAA as a power source and a MMC/SD carts for pictures (it supports sizes up to 1 GB, I thing). The optical zoom is only 3x but it is indefinitely better than a digital zoom (which is common among flat devices like phones and tablets).

The device is quite compatible with my other devices: the camera can be attached to a Linux computer via USB and it is also possible to take the card and read it in the Zaurus (the December viewer is nice for this task, by the way). 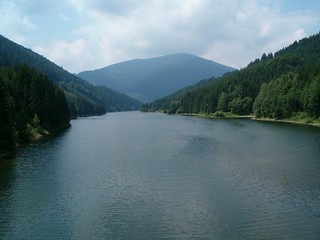 I first got this camera in 2004 and used it until 2011 (the card slot died and there probably were issues with batteries). The device worked flawlessly for at least 5 years in a quite harsh conditions: it travelled at least 6000 km on my bike (including about 1500 km on mountain roads).
Then, I tried to replace it several times but with only a very limites success. I tried to use more modern cameras (even better ones) but finally (in 2012) I bought a “new” HP 735 with dock for a very low price. Shortly after that it became my only camera once more. 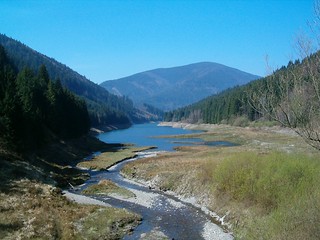 It is obvious that newer cameras have some stabilization, they are smaller and lighter (well, size is the biggest minus of my HP) but I am able to take the best photos with it. All photos that I took with other cameras, looks too ugly for me. So I still keep this old device.