After too much posts about cutting edge technologies (the Ubuntu Touch), there is a post about something more familiar. One of my favourite devices it the Psion MC600 laptop. It’s a 80086-based laptop computer from 1989. It’s not exactly fast (but it’s not that bad for a 8 MHz!) but it’s battery life is excellent – 40-60 hours of continuous usage and few months in suspend. And it is relatively light and compact, it’s not much worse than today’s mid-range notebooks. 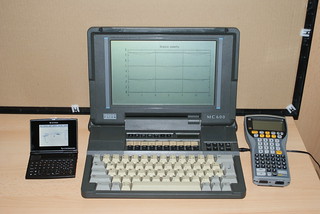 The problem is that there is no floppy drive (and no USB, of course). There was an external floppy device but it was very rare. I even have one but it is incomplete (no cable, no power source) and I don’t know if if works (it was sold as non-functional). The Psion-designed SSD disks are compatible only with Psion devices and today the SSD drive for PC is as common as the unicorn.

Fortunately, there are some more common interfaces: a parallel one and the serial one. It was a non-standard connector (it’s not Apple-compatible serial connector) but the Psion Series 3 cable has the same. So one can easily get a required cable.

I need to connect it to my SGI O2. It has a PC-style serial port. In order to make things work I have to find a null-modem cable and to connect it to the Psion cable with an adapter. Then things started to work.

The next part is software. There used to be scams that MC600 has integrated laplink software. There is no such thing on my Psion. Thus I decided to use the Kermit. Why? Because it’s a well-known and universal communication software that work on near any computer. So I was able to get MS-Kermit for the MC600 and the C-Kermit for the SGI. And they are compatible, of course.

The O2 has two serial ports. Being an actual computer, and not a PC-style emulation of computer, it has a serial console on the first port. So it is possible to connect the MC600 here a use it as a serial terminal. The commands to set the Kermit up looks like this:

Then it is possible to log in into the IRIX and start to work. The MS-Kermit supports Tectronics graphical terminal emulation so it is even possible to use the Gnuplot and see the graphical plots on the screen!

For a file transfer it is easier to use a normally-configured serial port (which is the second one on the SGI). The setup of the kermit will be slightly different:

You of course have to have a similar setup on the SGI’s side (the main difference is th set line /dev/ttyF2 instead of the set line 1). If your are curious about the low speed that I use (9600 baud) it’s because it is the highest speed that both device accept. I experienced errors on higher speeds.

After this your are able to use send and receive commands to transfer files.

As you probably know it is not necessary to type all the command on every start of the Kermit. You can put them to a file (say to a o2.tak) and load them with take o2.tak inside the Kermit.

This week there was a system update for the Ubuntu Touch. And smaller things are changing near daily. Actually, feature changes are rather tiny – the most of work was in the improvement of stability and features.

Most of core applications got new icons there are some new ones. The most interesting (for me) is the Weather application. It’s simple but reliable and easy to use. I thing that it’s one of the best weather applications that are available on all mobile computers. 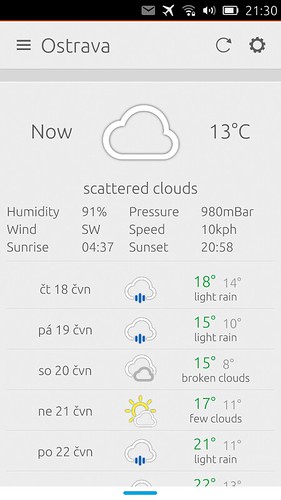 I also played a bit with the Terminal application. It’s a pretty clever program: Tab key can be simulated by double click, there is scrolling (one thumb scroll text, two can be used for command line history) and an additionar functional key bars are also rather well organised. The user experience is much better than on any other touch-based thing that I have had to use. 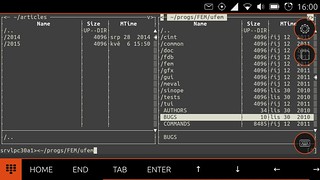 Also the SSH works well: see the screenshot for a remote Midnight Commander.

And I forgot: it of course works as a phone 🙂

As a temporary solution after a long chain of my hardware failures I have decided to get the Intel Compute Stick thing. At the moment I don’t have other modern desktop or notebook device at home (tablets don’t count – none of them fit’s my requirements for a comfortable desktop use).

I still use the O2 as my main desktop computer (for computing, writing and more) but there are things that have to be done on something more up-to-date (mostly WWW/Javascript/remote access things). I thought about something Android-based but it seems that an usual desktop operating system is better for me. Also the hardware compatibility is quite good with that stick – I use things like an external USB hub, an USB wired Ethernet and PS/2 to USB converter for keyboard and mouse and everything works. Also a HDMI to DVI converter works (I use the ViewSonic VP171b LCD screen with 1280×1024 resolution – an none of my Android-based devices support it).

Unfortunately, the Stick with Ubuntu is still unavailable so I opted for the available one.

I didn’t expected too much from the device but it actually works. The preinstalled OS is not my favorite but it works OK as a launcher for the Firefox. I’m going to test few more things (remote access stuff, some emulators,…)

The speed is better than I expected. But I’m rather patient person so others may find this computer to be slow. Anyway, I noticed that 20+ opened tabs in the Firefox cause some temporary freezings…

The Geekbench 2 score is 2309 (the links point to my actual results). It’s not so bad number as a 2.0 GHz dual-core PowerPC computers have Geekbench scores about 2000 and the BQ Aquaris phones (I have an Aquaris 4.5 with the Ubuntu) have scores about 1300. But it’s a synthetic benchmark, of course 😉

The OS of the Ubuntu phones is continuously developing. Lot of things have been improved during the last few weeks and at the moment I use my BQ Aquaris 4.5 as a main phone. Not everything is excellent, though:

Actually, I disabled most of scopes (jsut have a Messages, a Calls, a My Images and few other). 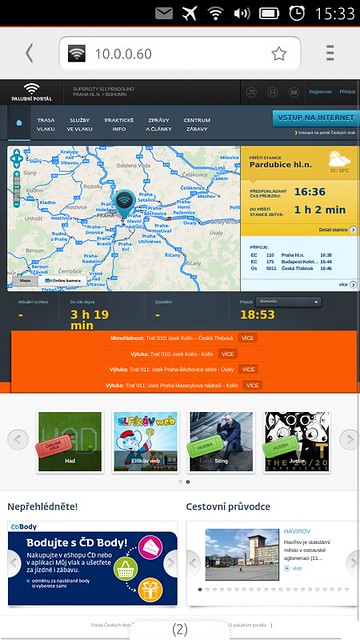 To be a bit more positive – I have to confirm that many other thing work and they work very well. There is even a new simple off-line navigation (still haven’t tried it in a real use, though) and many other interesting pieces of software. The WWW browser has soma limitations but usually works well (see the picture taken during in the train my travel from Prague). The battery can survive more than 3 days of my typical use (but I don’t made many call and I use WiFi only one-two hours per day in average).

It’s interesting that there are still people who adapt current software for use on old and obscure operating systems – the ResidualVM in this case. It’s an interpreter which allows to play some of LucasArts’s 3D adventures (the Grim Fandango and the Escape from Monkey Island are mentioned on the program site – of course you have to have an original data files – you can try some demos, too). 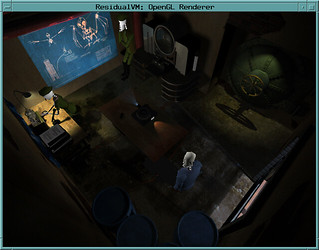 Go here for details about the port.

I spent most of Saturday in attempts to make at least one working PC from several older machines. There was a buch of machine that were used by me or by my family: a Pentium @150 MHz, an AMD K6-2 @233 MHz, a Pentium III @1000 MHz from Dell and some parts from other machines.

Actually I don’t need PC that old: my DOS-related stuff can be handled with the Psion MC600 (with bonuses of absolutely quiet operation, portability and a looooong battery life) and the rest can be done on the SGIs. I wathed to do two things: a) review the hard drives in order to find some missing old data, b) do some speed comparison between PCs and SGIs. I was also curious how (and if) the Minix3 and the Plan9 will run on such hardware (the Minix at least boots but I didn’t tried the Plane9, yet). Also I knew that the Dell is non-working but I tried to ressurect it as well.

The results are somewhat poor: too much parts were already dead. So finally I have managed to make a semi-working computer of this setup:

At the end I put the thing back to storage. Maybe I will find more time later to install sometring working on it.

P.S. I tried to attach the IDE harddisks to my IBM Intellistation Pro E. It is a thing thal looks like a real computer – it’s black, it has a SCSI and so. But it isn’t. It is a PC (Pentium II – based). And, yes, it is possible to attach an IDE disc. But when I did that then it startet to book from the IDE device only and it totally ignored the main SCSI drive. It’s BIOS don’t allow to change the order of startup device (it is possible only via an utility for Windows – which is useless in this case becouse the box runs the Debian). When I disabled the IDE devices in the BIOS (which was the necessary to allow boot from SCSI discs) the these devices were (obviously) invisible from the OS… 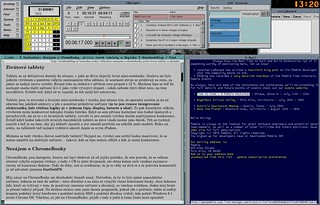 Anyway, the software is still the same. After some years I returned to use of audio CDs. The quality of the internal speaker is quite good (albeit the good old Indy has much nicer sound subsystem) so it makes sense to use such things.