I decided to cease posting here and move to jirka.1-2-8.net. Why? Because I publish more via the Gopher protocol than the HTTP/HTTPS one. And converting from Gopher to http must be done externally.

I might still publish something here (from time to time). But my post frequency is so low that it will probably make no difference…

First I have to explain where this site is almost dead. There are some reasons but the main is that I use my Gopher site to publish my thoughts. This happened not only because I like the simplicity and oldschoolness of the gopher:// protocol but also because the WordPress is no longer feasible on my main desktop computer (after 14 years it still is the Silicn Graphics O2 workstation).

Well, at the moment I’m using my laptop which is a bit newer so it can handle the WordPress better.

So what is my home computing just now? The desktop is, of course, the Silicn Graphics O2. I do here almost all off-line work like making of articles and presentations (Vim, Gnuplot, GNU Octave, XFig, LaTeX), programming (Vim, gcc, BWBASIC), music playback (XMMS), agenda (GNU Remind, todo.txt, JPilot) and so. I use the SGI 1600SW widescreen LCD for the O2.

During time I had to introduce the institution of a second desktop which is used to interface USB devices and for “modern” WWW browsing (i.e. for browsing of all pages which are insecure or even unavailable for the SGI O2 and its browsers: the Firefox 2 and the Links 2). At the moment this service is provided by the ODROID XU-3 which is hidden in a Mini Indigo case.

The laptop is now the GPD Pocket. It was out of service for several months because of the faulty battery but finally I managed to get a new one and now I use it. It also means that my Gemini PDA now shares the shelf with the PSION and is no more actively used (it was a handy replacement when the GPD was unavailable but it’s an Android device with some hardware flaws so it cannot compete with a real computer with actual Unix-like OS).

The PDA is the Palm IIIx because mankind developed nothing better, yet. I actually use a IIIx for home use (offline www reading, passwords, unit conversion and other fas calculations and so) and a IIIXe for outdoor uses like shopping, making of field notes, taking pictures with the PalmPix and as backup device for geocaching. With the Metro I can even search for tram connections but all Metro databases for Czech cities are horribly outdated. I have been thinking about making a new one (at least for the Ostrava) but still done nothing in this direction. And as a phone I sue the PUNKT MP01

The last important things my ethernet router. I use an old and cheap TP-Link thing for more than 5 years and sometimes also a Belkin WiFi router for devices which have no Ethernet connector.

I also have several others computers awailable but they are not used too often: the SGI Indy, the SGI Indigo and the the IBM Intellistation 285. And several pocket computers and laptops, too.

Now the plans. There are two big changes planned. The first is to replace both routers (the TP-Link and the Belkin) with the Turris MOX device. If it arrives after all then at first I will try to use it as a Belkin replacement. Then, it if will work, I will try replace the TP-Link device, too. It’s modular and I already have ordered all modules necessary for this role.

The second thing might be less important now but it’s a big one. I plan to change my primery workstation. Of course, I don’t wish to use something compatible with the x86_64 paltform so I opted for the Raptor Engineering’s BlackBird. I will use a stock PC case for it so visually it will not be comparable nor with the O2 nor with the IntelliStation. But it should be faster than both of them. Of course I don’t think that I will be able to replace my O2 (with its heavily customised environment) so easily. Thus it should replace the ODROID at first. When I will be able to use the Blackbird as such then I will start to phase out the O2. The problem is that I’m accustomed to the FVMW but I have no clue how to effectively combine it with requirements of modern desktop services (the IRIX is much simpler and can handle many things easily, today’s Linux, ehm, I mean the systemd, is not).

The rest should remain as is. My phone is new and I’m actually satisfied with it. It noen of my Palm break then I will usem them, too. An I hope that the new battery of my GPD Pocket will be better than the original one (it survived only one year of regular use).

This blog is very silent in last few months. There are two main reasons: I publish mostly on gopher and at work I am too busy.

I do lot of boring office work but sometimes I am able to do something more interesting: some computing, modelling and so. In these cases my desktop looks like on the picture. 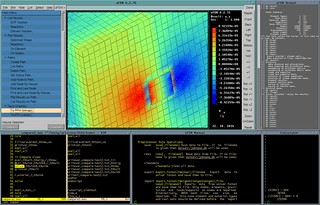 I needed to co some computing with use of my FEA package. Of course, I have found several bugs. I also found that some features are already implemented… (I forgot that they exists – fortunately they were describen in the manual). That was funny.

There are some issues: the GUI of software is written in Gtk+ 2.x (and there are fallbacks to Gtk+ 1.2.x and to the basic CLI + GLUT interface). And it’s old and very slow. I wrote most of the GUI before 2006 and I mostly didn’t touched it after that. So portability to Windows or Mac is limited and it is not posssible to run it natively on Ubuntu Touch (nor run it under the Android at all). I though about making of Motif GUI but I never started to code it. And now it probably makes no sense as Motif is even les portable than the Gtk+. 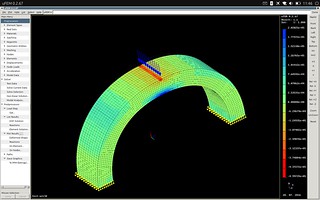 Honestly, the GUI is fully functional in the Ubuntu Touch but only inside the Libertine container (via the XMir) so it looks ugly and it requires external hardware keyboard to be usable. But that’s a small problem. The bigger one is that the only Ubuntu Touch device which I can use for such task is the Aquaris M10 tablet. And it is surprisingly slow when doing this type of computing (but speed in GUI is OK). I’m thinking about Qt5 port but it looks like a long-term problem now.

Well, I still not use the Ubuntu Phone as my main phone. I have sent several SMSs and somewhat more e-mails from this device and I use it as a camera and as a feed reader.

The main part of the time that I spend with the device is testing what it can do and how comfortably.

Below are my observations and notes:

The environment itself is relatively stable but there are issues:

And at the end there is my wishlist:

That’s all for the moment…

Ubuntu Phone in Use