I’m writing this in a train. On a Zaurus. Of course. Actually, I have had my notebook with me (a 17″ Dell Vostro) and I used it for some work-related stuff (word processing and a spreadsheet work). It made sense this time as the travel time was quite comfortable (in the normal working hours) and the rest of my moving was done by public transport. There were no longer walks with a heavy laptop.

Anyway, when the work was finished then I moved the notebook to the bag and opened the Zaurus as it occupies much less space. Then I was able to put a cup of tea and a snack on the small table in the train. And the Zaurus is enough for some writing and hobby programming, you know. 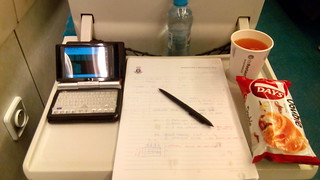 I also have had a Ben NanoNote with me. I wanted to test its WiFi card… and it still works. But it’s keyboard is much less ergonomic than the keyboard of the Zaurus so I used the Ben mostly as music player this time. As I forgot to get a CF WiFi card for the Zaurus, I had to use the NanoNote to sync the stuff with the Git (I don’t know it the Zaurus WiFi can work at all – it’s the old “b” standard and event if it will do then the Zaurus, of course, cannot run the Git). Then I pulled the microSD card from the Zaurus and inserted it to the NanoNote to copy the data. It’s a bit stupid solution but it works (the microSD card is a 1 GB one which can be accepted by the Zaurus: bigger cards don’t work).

In theory it should be possible to replace both machines with a smart phone. For example with the Ubuntu one. In practice, this doesn’t work. The phone has no comfortable keyboard and it’s screen is uncomfortably tall. Also the approach of isolated applications (which has been adopted by all phone OS vendors) only makes desktop-style use of phones more complicated. In a contrast with this, both the Zaurus and the NanoNote are actually pocket-sized unix workstations (the Zaurus is more close to that), albeit with strange user interfaces (there is no viable X11 suppport). The TeX and the gcc works well were, and many other traditional tools work (the Gnuplot, for example), too. There are no problems with isolated applications directories – a normal system of unix access rights is applied here.

More on this topic after the next train journey…

Among others, I have an old and semi-working Zaurus SL-C750. I got it mainly for some experiments. It has damaged sound chip and its cosmetic conditions are also quite poor. Also the hinges are not perfect. I also got it with a poor battery. Except these issues the device works well (a perfect screen and a keyboard, working data card slots and no stability issues).

I initially installed a high-capacity battery (the same that is in C3xxx and C1xxx models) and a larger battery doors. But I find that this Zaurus is not used frequently so the bigger battery is probably not necessary. It was also my oldest battery and the most heavily used one – an original one – which was removed from my SL-C3200 Zaurus. So it’s remaining capacity was also quite limited.

On the other side, it makes sense to have a slimmer Zaurus for infrequent use (the SL-C3200 is quite thick for my liking). So I have found a new small battery (an original replacement part for Zauri) and put it into the device.
So the Zaurus is now a bit lighter and much thinner and thus easier to handle.

The battery life is a big unknown now. It should be expected that it should allow about 3 hours of continuous use (which is enough for my typical use) or even more. The sleep time may be more important. Now I only know that 12 hours of sleeeping resulted in use o 5% of the battery capacity.

I tried to put a Hitachi Microdrive (a real harddisk in a small form factor) to the CompactFlash slot and use it for some compilations. It resulted is use of 15% of battery in about 15 minutes. The HDD is power-hungry so it’s seems to be OK.

A first week long use indicates that even with the small battery it can survive whole week in suspend without charging. And the second week of use was the same – no problems with battery life. That’s nice. As I use the Zaurus infrequently it means that I can have it always ready for use without being too worried about an empty battery.

Downgrade (a sort of)