I almost forgot that I have a Kodak PalmPix camera for Palm III. It’s a add-on thingy which can be connected to the searial (cradle) port of the Palm III and VII (and the TRG Pro and possibly some Visor machines). It’s a 640×480 fixed-focus device so it’s not spectacular today (it’s from 2000 – see the review at geek.com). 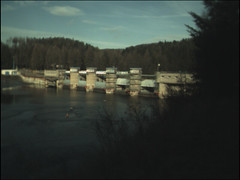 When I searched for a desktop-based software to retrieve the pictures I also found an older review by Logout. He has a different model which is mechanically compatible with newer Palms.

The software collection (for the UNIX/Linux) is not that spectacular:

The pilot-link version doesn’t work for me and it’s latest versions don’t compile under IRIX. The “palmpix” does but it doesn’t work (it runs perfectly under the x86 Linux, though). So I have to download the ArchImage.pdb file under the IRIX (I don’t have a serial port on my Linux PC and I cannot find my USB-serial adapter…) then send it to Linux machine for conversion to bunch if bitmap files.

Last Christmas I got a nice toy: the SCSI2SD card. It allows to connect (micro)SD cards to the 50-pin SCSI bus. So one can use modern storage device in a vintage computer 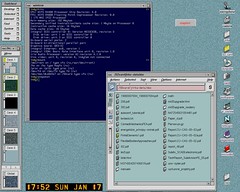 In my case it was a SGI Indy computer which was used as a testbed. The card allows to emulate several different device types (magneto-optical, removavable and a hard disk). In my case only the hard disk was fully recognised by the IRIX (6.5).

So I initialised this harddisk and mounted it. Thus now I have a XFS file system on the microSD. The speed of the device is probably limited by the SCSI bus (I will try to put something large on the card and wil; try to play with it in future). I hope that it will be OK…

There are some limitations, of course: the card has to be configured via an USB from PC (Linux/Windows/Mac) computer and one of the parameters is the fixed size of the disk. So it is probably not the best solution for file exchange.

As a reaction to my previous post LOGOUT conducted a much larger comparison of old machines (in Czech language bu I guess that computer names and times are easily readable, also the graph). 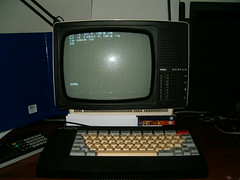 So I tried to start my Elektronika Bk 0010-1 to get some more data and it executes the code in 408 seconds.

A bigger problem for me is that I am unable to get a stable screen on my monitor (a B/W TV which has designed to be also used as a monitor for old Czechoslovak computer). I don’t know if the problem is in the computer, in the cable (which looks OK) or in the TV itself…

I just have found that it is possible to make Ubuntu phone screenshots in the same way (by pressing volume up and volume down simultaneously) both on the phone screen and the external screen (if available). So there is one example:

I use a Lenovo bluetooth keyboard with the device without problems. The Alt+Tab works and one can have several windows visible at once.

The convergence feature is still in the development. There are things that I miss the most:

I found these interesting pages with some bechmarking data for old computers (with a program in BASIC): 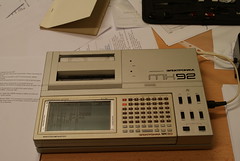 My problem is that the BASIC on the Elektronika MK-90 cannot handle 500-member field so I have to limit the W to 250 (the original code has W=500). Unfortunately, it made my results directly incomparable with the published ones. I also have to slightly modify the BASIC code:

So my times are:

By the way, the original test was mean for home 8bit computers but MK-90 is 16bit and O2’s MIPS CPU is of course 64bit…

There is a software update available for the Pebble smartwatch. It introduces the ‘timeline’ feature on the 1st generation Pebbles. And there are other changes.

The most noticeable change is the Timeline. It slightly changes the behaviour of the Pebble. The up and bottom buttons of the watch were originally used to swap the watchfaces. It was something even anoying (one had to switch between severel faces – some of them were build-in and they were non-removable). Now they are used to switch between past and future events in the calendar: the basic view is the watchface (just one which can be only changed in a setup dialog) and the buttons can be used to see the events. First I found it a bit strange but now I thing that it is a quite nice feature (the events have to be downloaded when the phone is connected via the Bluetooth).

The second thing is applications handling: there is no visible list of actually installed applications and they are downloaded to phone on the first request to use them. Thus the user can have as much applications in his smartwatch menu but not all of them are actually present in the watch and they are only in the phone. It’s a nice feature for people who have their smartwatches always connected to their smartphones but it is a bit problematic for the ones who use the watch mainly off-line (like I do).

At the moment I use only few applications (I have tried to use more of them but I don’t need more for most of the time).
I have two apps mapped to the fast start buttons. The top one is the Misfit and the bottom one is the Compass. The normal applications are in the menu in a order which is identical to their frequency of use:

And as a watchwace I use the Glow. I though of using of some games but I still didn’t found time no time nor reason to use them…

P.S. Inmediately after the update my Pebble started to show some screen issues similar to those experineced by Simon Royal. As it happens randomly and still not so often, I still not decided to take any solution.

I recently turned on my Psion MC400 laptop. I planned to use it on a retro-computing event some time ago but unfortunately I didn’t attend it at all. Anyway the MC400 has fully charged batteries and it is ready for some adventures.

The MC600 is already ready to use (it is kept alive for all time – just for the case). The reason is simple: being a (less or more) ordinary PC laptop, the MC600 is much more versatile than a much cooler but also much more limited MC400 device. The MC600 can run unmodified DOS programs (text-only ones and CGA-compatible graphical ones), and there is also a C compiler for the device. The MC400 runs early version of the PSION’s SIBO operating system (it cannot run software even from the PSION Series 3 machines which are the closest relatives of the MC400). So the basic software for the MC400 is impressive (a graphical shell, a calendar, a word processor and a spreadsheet) but not much more is available. And there is an OPL programming language which doesn’t allow to write no GUI nor graphical programs. 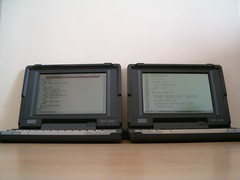 The plain text window with command prompt of the MS-DOS 3.3 is much less impressive but it makes the MC600 more versatile. This is also probably the reason why the MC600 is visibly heavily used but the MC400 is like a new. I have some plans to use the MC400 for some OPL development but these are plans for the far future.

I use just several program on the DOS-based MC600 on a frequent basis:

The Volkov is still good for file management but also for vieving and editing of files. The Kermit is used to transfer files via serial line (it works well with my SGI O2). The use of thext editor (XVi) is probably obvious (this post is written in the XVi). The Gnuplot is used to visualise outputs of my programs. The sc is used for a compatibility with my desktop.

There are some other thing installs (like the Atari Portfolio connection software) but they are used rarely.

The MC400 has several interesting applications but now I use only a text editor (for OPL programming) and a calendar (just to play with it). There is also a spreadsheet (it’s Lotus123-compatible) but there is no way to plot graphs (or any other kind of user-defined graphics). The software limits are understandable: the whole box has only 256 kB (not MB nor GB!) of RAM and it is also used as a RAM disk (the DOS-based MC600 has 1024 kB; it was of course much more expensive). So it is possible to have opened several apps at once and to switch between them but the data must be small. The OS refuses to start new applications if free RAM is too small. 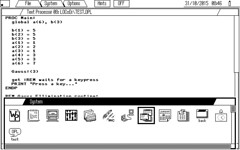 Anyway, the use of the MC400 operating system is easy and comfortable. There is a huge touchpad available. Mine is hard to use but it can be related to its age. And the system and applications can be completely controlled from the keyboard.The key shortcuts are bit special but not too much. There is a dedicated Psion (cmd) key which often works like the Ctrl. So for the copying the cmd+C and cmd+V are used, for example. There is also a special Task key to switch the programs. All the keys are listed in the well-prepared system help.