Some people use modern things like the Phillips Hue smart bulbs. That’s an interesting thing: a replacement for traditional bulbs that can be remotely controlled from computer or smartphone. So it is possible to turn them on and off or change their light intensity and colours from the compute.

You need a bridge – a small computer which is connected to your network and which is able to sent commands to the bulbs. And a software to control the bridge. There are clients for common phone operating systems, and even these with Ubuntu Touch phones can do it. But what about the users with the real UNIX computers?

Well, there is someone who (probably between TenFourFox compilations) wrote a command line interface for Hue in a Perl: the HuePl.

The use is simple – you have to setup the things during first run (them most complicated part is finding of the brige’s IP address) and then you can start to use it. For example command to set the bulb numbered 1 to red:

Jus be sure that you have a colour-capable bulbs. There are also ones with white colour only. In this case the above mentioned command doesn’t work! 😉
One can even call the HuePl from cron to made or change the light in a predefined times. I tested the thing in my home network and used the HuePl on my IRIX box.

The new Ubuntu Touch update (the OTA-7) is available. There are some new features and a lot of bugfixes.

So what is here?

It is said that application startup times have been improved. It’s possible but I personally don’t see a big difference. The office documents viewer is still in works so it still isn’t included in the update.

Well, not exactly. But I probably (and maybe just partially) solved my problem with remote control of a music player. Before a very long time I had an iPad with a remote controls. It wasn’t a bad solution because it allowed to have the player itself to be hidden in the bag and the controls were able to be placed on some well-accessible place. And an inability to remotely control the music playback was the main problem of the Ben NanoNote’s music functionality (it has many other advantages, though). The ability to at least switch the songs and stop the playback remotely was one of main reasons why I used my iPhone 3G so long.

My Ubuntu Phone has no such possibility (I don’t know it there is any compatible third-party product). So I have concentrated on the old Sharp Zaurus machines. There are at least two types of a remote controls (CE-RH1 and CE-RH2) but they are very rare (they are rare the most probably because they were sold as a separate – and quite expensive – add-ons).

As a surprise, my favorite handheld supplier send me the complete CE-RH1 set as a present! So now I have a remote control for my Zauri.

The remote itself is very nice. It isn’t a jewel of the design (as the Apple’s remotes are) but it’ fully funcitonal and also quite powerful: there are the start/stop buttons, the next/previous buttons and the volume control (for example, the modern iPhone control only allows to start/stop and to shuffle songs). The Sharp’s remote thingy is also quite big but a very light so it is very comfortable.

There are problems with my Zauri, though. The 6000 has a 2.5 mm audio jack which is incompatible. The 750 has a damaged audio system (a hardware fault) so it doesn’t make sense to use an audio remote here. And the 3200 has problems with drivers (I don’t want to reinstall it because I have lot of other working – and more important – things here). So the only candidate is the SL-C750. It’s white-silver colour also well matches the colour of the remote. And the things work well, there is even no need to have the music player in the foreground. So the main problem is a size of available space for music. The biggest compatible SD card size is 1 GB (there is a driver for 2 GB cards but it works only on the newer machines and not here).

So, after some time and some fixes, I considering to start to use the Zaurus on a less or more daily basis. I’m going to see what happens…

Some people say that they already found all geocaches that are located on interesting places. Fortunately, it is not my case: 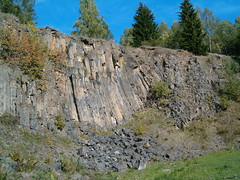