Thanks to care of one good person I now have a working SGI Multilink adapter for my SGI 1600SW displays. It is very useful thing as the 1600SW has a non-standard digital input (it is quite old and when it was designed then there was no DVI at all) so by default it can be only connected to a few SGI workstations (and even these might require a special add-on card).

The 1600SW is relatively nice even today (17.4″ screen with 1600×1024 resolution). It’s colour space is somewhat limited (by today standards) but this is OK for me. I am not a fan of high-resolution displays (at work I have a 12.4″ screen with 1920×1080 resolution and even with a contemporary OS the whole thing is too painful) so I with to use my old LCD screens as long as possible. 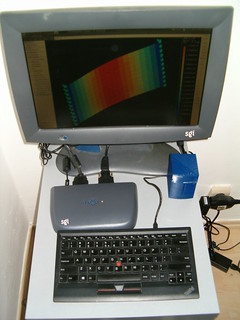 I still have one non-resolved issue in my home computing: my secondary desktop (that web-browsing one) was the Intel Compute Stick (Ubuntu version) and it died last year. I have replaced it by the Lenovo X61s laptop but I still don’t thing that it is an optimal use of a ultra-portable PC (and it’s even a PC).
Last year I have got a 3D-printed miniature of the Silicon Graphics IRIS Indigo computer from Dodoid. I had no particular use for it, I just wanted to have that toy.

But the device is designed to fit the ODROID-XU4. So I have obtained a second-hand one in order to try to replace the X61s. At least is’s not PC-based.

The first attempt to used it failed as I haven’t been able to make it work with my ViewSonic VP171 LCD or any other LCD with 1280×1024 resolution. It seems to me that there is no easy way to make the Xorg (or the hardware itself) to send a proper signal – the image was something like 1116×1024 instead.

So I decided to try the wide-screen 1600SW with the ODROID. So I prepared the testing setup (pictured above) in a separate room, connected everything together and it simply worked! So now I should re-arrange my working desk to put the new stuff on in (hopefully it will not need further year…).

The pre-installed OS on the ODROID is the Ubuntu 16.04 (MATE Edition) which is actually not too bad. The MATE seems to be quite fast (and it is basically an updated GNOME 2.0 which is probably the last usable desktop environment for the Linux – it’s uncomplicated and configurable enough). So I will probably continue to use it.