The Fossil (also sold as the Abacus) Wrist PDA was actually a full-featured but miniaturised version of older Palm pocket computer. It even has the same screen resolution. 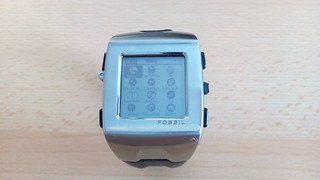 This particular Fossil Wrist PDA smartwatch is the model 2.0 from about 2004. I have got this one for a cheap but is is a bit weared and the Back button is damaged (so it is impossible to switch the programs). It was also necessary to replace the battery (compatible bateries are available for modern sporttesters).

It’s passive black-and-white display seemed to be obsolete when it was introduced (the comparable Palm PDA computers – Palm III, V and the m500 lines were from 1998-2000.

Its main problems were (and still are) moderate battery life (1-3 days) and its weight (over 100 grams – a comparable PDA was about 180 grams). They also aren’t water resistant. The 1″ screen is also not optimal for many users (there is a mode with bigger icons – only 4 can be shown – but the rest of probrams has still the same size).

There are other issues – the integrated stylus is very small and it is uneasy to target the UI elements (menus, buttons) with it. Also the calibration procedure requires a lot of precision and patience. But the writing itself is not that hard as one can use whole screen area to enter Graffiti characters (so the actual writing area is not much smaller than on an usual Palm device).

Anyway, it offers to have a complete Palm-compatible PDA on the wrist. It supports Graffiti data input, most of Palm OS applications. The stylus is included, of course (it’s hidden in the belt). Obviously, there are some limitations: unavailability of some standard hardware and software buttons – so one cannot control some programs and cannot even open the program menu – it’s a case of the CSpotRun.

But there are rich (for it’s time) connection options: miniUSB connector (both for charging and data transfer) and infrared port – thus one can exchange data (and even applications!) with other Palm devices (and not obly with them) without any trouble.

In comparison with modern smartwatch stuff it is not so bad: it has better than average battery life and it is actually a full computer with ability to locally store data (calendar items, contacts, passwords,…) and create and edit them. It probably still can be synchronised with computers (at least with Linux ones as it is long unsupported on the Windows platform).

I normally use the Pebble smartwatch which has much better screen, is is lighter and has extreme battery life. But is’s mostly for reading only (it has no easy way to enter/edit data or to store them locally). As I don’t use connection between the Pebble and the smartphone, this old Fossil can be better for me in many cases. But I need to address it’s technical problems first (well, I have to find a way how to repair it’s buttons…). 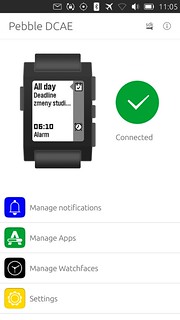 It seems that most of things works: upgrading of a Pebble OS, software installations and configurations, phone’s calendar integration with the TimeLine, and more. I don’t use the Pebble for notifications so I cannot comment how good it is. I just synchronize the smartwatch with my phone once per few days. For this type of use the RockWork is even better than the official smartphone application.

The official app can also put weather forecast to the TimeLine which I miss a bit.

At the moment I use the Pebble Smartwatch mostly off-line. Now it works well with Ubuntu Touch (via the RockWork) but I don’t need to be always connected. I do sync the phone calendar with the TimeLine on the Pebble but nothing more. The rest of use is off-line.

I have experienced the screen image distortion problem but it his rather random. So I decided to ignore it. 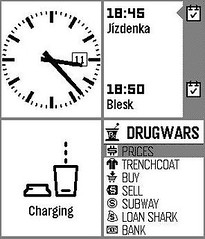 I use 3.x firmware on the smartwatch. My list of favourite applications is (the order is based on usage frequency):

There is a software update available for the Pebble smartwatch. It introduces the ‘timeline’ feature on the 1st generation Pebbles. And there are other changes.

The most noticeable change is the Timeline. It slightly changes the behaviour of the Pebble. The up and bottom buttons of the watch were originally used to swap the watchfaces. It was something even anoying (one had to switch between severel faces – some of them were build-in and they were non-removable). Now they are used to switch between past and future events in the calendar: the basic view is the watchface (just one which can be only changed in a setup dialog) and the buttons can be used to see the events. First I found it a bit strange but now I thing that it is a quite nice feature (the events have to be downloaded when the phone is connected via the Bluetooth).

The second thing is applications handling: there is no visible list of actually installed applications and they are downloaded to phone on the first request to use them. Thus the user can have as much applications in his smartwatch menu but not all of them are actually present in the watch and they are only in the phone. It’s a nice feature for people who have their smartwatches always connected to their smartphones but it is a bit problematic for the ones who use the watch mainly off-line (like I do).

At the moment I use only few applications (I have tried to use more of them but I don’t need more for most of the time).
I have two apps mapped to the fast start buttons. The top one is the Misfit and the bottom one is the Compass. The normal applications are in the menu in a order which is identical to their frequency of use:

And as a watchwace I use the Glow. I though of using of some games but I still didn’t found time no time nor reason to use them…

P.S. Inmediately after the update my Pebble started to show some screen issues similar to those experineced by Simon Royal. As it happens randomly and still not so often, I still not decided to take any solution.

I didn’t expected that such thing will be here at all but some nice people did it: the upebble is an application which allows to send notifications from Ubuntu Touch device to the Pebble smartwatch.

It is in relatively early stage of development so now it only supports notifications but much more is planned to come (applications management and more).

It works nicely on the rc-proposed version ot the Ubuntu Touch (the stable Ubuntu Touch has still issues with Bluetooth so my Aquaris can’t connect to the smartwatch at all). The user interface is a bit confusing at the moment – there are two functions: a management of Pebbles (which does nothing right now) and a notification control which is only active after the first notification come. But after that, it just works.

After few years without working wristwatch I decided to try a new one: the Pebble Smartwatch. Yes, if was after this post by Logout.

They were designed as an external display for a mobile phone but their possibilities are higher. Actually, I do connect it to the phone only when I want to update OS or applications. The most of stuff that I use on the Pebble is offline: 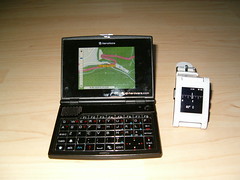 I will probably write more about the Pebble later. There is a possibility to develop own applications and I have few ideas for the future. Maybe I will be able to find some time to translate the ideas into computer code….