Recently I have updated some of my Palm handhelds. I also wrote a gopher post about this upgrade.

The smaller change has been done on my “main” Palm, the Palm IIIx. I replaced the non-transparent screen protector with a translucent one. It looks better now and also I can actually see the screen when the protector is used. It looks line unimportant thing but it isn’t. I have hat to turn off Palm’s system sounds (even the “low level” is too noisy at night) so now I have no acoustic information is something is wrong during the syncing with the computer (Palm synchronization takes some time so I usually start it and then switch to other screen to do something useful). But the translucent screen protector allows to control if the synchronization is still under way or if it is stopped on a problem. 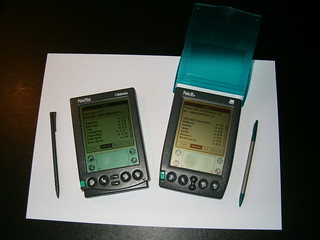 The older Palm Pilot has been updated much more. I first have to select the best working one (a Palm Pilot Personal made in Malaysia) and then complete it with a stylus and the battery doors with other ones. Then I removed the old memory card (512 kB) and replaced it with the Palm-branded “2 MB upgrade” kit. It also includes a flash memory with Palm OS 3.0 and an infrared (IR) port. On the picture above you an see this thing on the left. It means that this old device is now compatible with my “main” Palm (it can run most of the applications that I use and it can communicate with it via infrared protocol).

There are also other improvements: the main one is that the Graffiti recognition is more much more tolerant (I have had problems with text input on the Palm OS 2.0 – my writing style has been always terrible and the number of errors was much higher than it is on devices with Palm OS 3.0).

At the moment I transferred (via IR, of course) some data (ToDos, Memo notes and AddressBook entries) and some applications to the upgraded Palm. So I can say that the CSpotRun, the KeyRing and the DopeWars works well. And I probably don’t need more here 😉